Information about London specific events, from Nigel, aka SubDirectory (3). Most BLUF London events take place at The Backstreet in Mile End, but many members also regularly attend the London Leather Social and meetings of London Leathermen. We also organise a presence at the London Pride Parade. 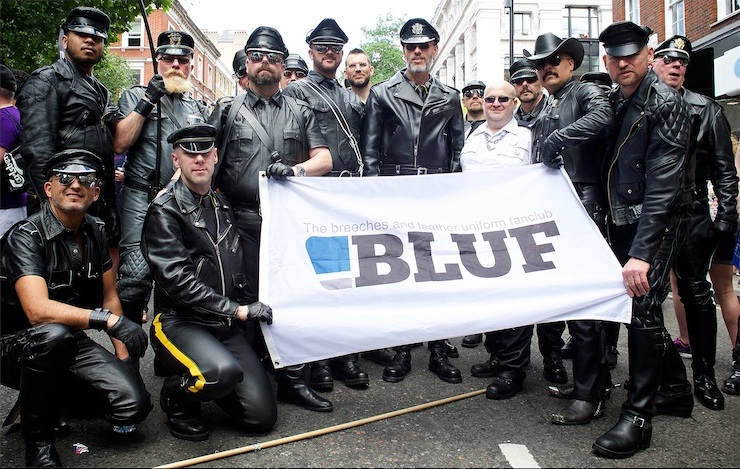 More
Not a BLUF member? You can still keep in touch, by registering for news by email. Enter your address, and we'll send you a link to register for news register

Click to search BLUF for bars, clubs, photographers or shops in this city

See what BLUF Local is doing in these other cities:

These photos were taken by Nigel, aka SubDirectory (3) before the march, as members of BLUF and London Leathermen gathered at One Marylebone.

The photos in this gallery were taken by Nigel, aka SubDirectory (3) during the London Pride Parade 2017. Principally of BLUF and London Leathermen, it also includes a few other general shots of Pride. Click the photo to launch the gallery, and click the link below a photo to view it on Flickr

The photos in the gallery on this page were taken by a variety of people during the 2017 London Pride Parade, and show the BLUF / London Leathermen group. To view full details of each photo on Flickr, click the link below each picture.

The photos in this collection were taken by John, aka nettyjohn (2553) on the Pride Parade, and follow the BLUF and London Leathermen group from our rendezvous at the King's Arms through the march. Click the photo to start viewing the gallery of over 200 images, or view them on Flickr

The battle for Backstreet

Last night, at a meeting of the Tower Hamlets Strategic Development Committee, the future of London's only leather bar was secured - for the time being at least.

Backstreet is the only part of a large building that's still in use. It occupies the back of a larger